This page is to highlight those Nappturalistas out there, both celebrities and the everyday Joe, who embrace their Nappturalness to the fullest.
This Nappturalista is probably more known in the African continent. I came across her buy accident and absolutely love her style.
Asa﻿
Born Bukola Elemide, in Paris, but grew up in Lagos Nigeria.

Her first, self titled album was released in 2007. The second Beautiful Imperfection in 2010

I make take this hair style

Previous Nappturalistas﻿
﻿
This Nappturalista is probably not on the napptural radar as much as others, especially as she's such a great actress.


Sophie Okenedo OBE
The daughter of a Nigerian and Ashkenazi Jew, who received an OBE in the Queens 2010 Birthday Honours 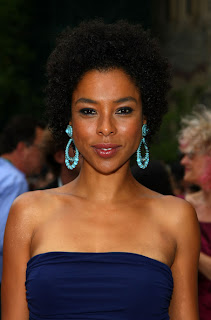 This look is very sultry and sophisticated, who said natural hair isn't suitable for
formal occasions

On the film Hotel Rwanda

So simple but still good

﻿
For the first Nappturalista I thought I would highlight someone that I didn't even know was natural until about a month ago.
Solange Knowles 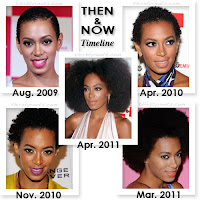 Unsurprisingly she got some negative comments when she did her BC, here are some of them.
“She is trying to copy the newest black icon Amber Rose..I think she looks terrible”
“The motive is still unclear but considering how gorgeous her mane was, it’s not a great style choice”

dont. need. your. attention. or. your. co-sign. i am #3. trending topic. before. IRAN. &. some of you cant even locate it on a map. its sad.dont. want. a. edge. up. or a perm. because. im not trying. to make this “a style” or a statement.i. just. wanted. to. be. free. from. the. bondage. that. black. women sometimes. put. on. themselves. with. hair.this. phase. of. my. life. i. want to spend . the time. the energy. and the . on something else. not in the hair salon.im. not. mad. at . all of you. that have made your opinions known. and have sent negative. energy. my way. i expected this of you.you. have. the right to have. an opinion.so. do. i.ONLY reason i responded to this i have is because i was disappointed to see my name more talked about then #iranelectionwe. gotta. do. better. people

﻿
Big blow out. This shows what you can achieve when
you give your hair what it needs
I can't wait to see what her hair will be like in 5 years time, I hope she is still natural then and I'm sure she would have wowed us with some fabulous styles.﻿ Maybe some of the people who tweeted negative comments will also have been inspired.

How I wear my hair to bed

post banding
I wanted to give a shout out to all those naturals out there who prove that natural hair is versatile, stylish, and definately not something to hide.
Most of these images were taken from Lecoil at tumblr, others are from Thirsty Roots, Natural Hair Rules and general web images.

Click here to utilise a search engine that caters for the Napptural you.

This is my current style, it was done at Purely Natural in Stratford.